Our Mission is to improve the quality of life for those who live and work in the Parish of Gnosall and those who visit it.

Since the initial anti dog fouling campaign was started, there has been a marked improvement in the 6 identified hot spots and following the last spot check only two occurrences were noted. This is of course two too many!

However, there are still far too many incidences of irresponsible dog owners not clearing up after their dogs. Locations that have been passed on to me include Lowfield Lane, Glebe Lane and the Railway Line from the intersection with Lowfield Lane right through to the exit up on to Broad Hill.

This is, of course, not acceptable and efforts will be focussed on these areas in the coming weeks and months.

One other practice which must be stopped is where owners do bag their dog’s faeces and then leave the bag on the side of the path. It is not the responsibility of either the Best Kept Village team or the Parish Council to clear these up - although both organisations have done so! Please take the bag to one of the many bins situated just off of the path or pavement. The bins cannot be sited on the actual railway line as the collectors are only allowed to collect within a limited distance from their lorry.

I am aware that the vast majority of village dog owners are responsible and do clear up; the evidence is obvious by the number of them I observe walking around with full poo bags! So let’s not let the village down by laziness or irresponsibility; if you own a dog it is a privilege, but with privilege comes responsibility.

Unfortunately, the issue of free bags is now strictly limited due to Borough Council cut backs, but in truth, a pack of scented nappy sacks doesn’t cost much more than £1:00, so PLEASE CLEAR UP AFTER YOUR DOG.

GG’s Youth Club celebrated its 2 Year Anniversary on 11th April and members really enjoyed the evening. We played lots of team games and a food buffet was served. Children also made GG’s a card to say thank you to Jordan Archer, Team Leader. We are looking forward to many more years at GG’s. 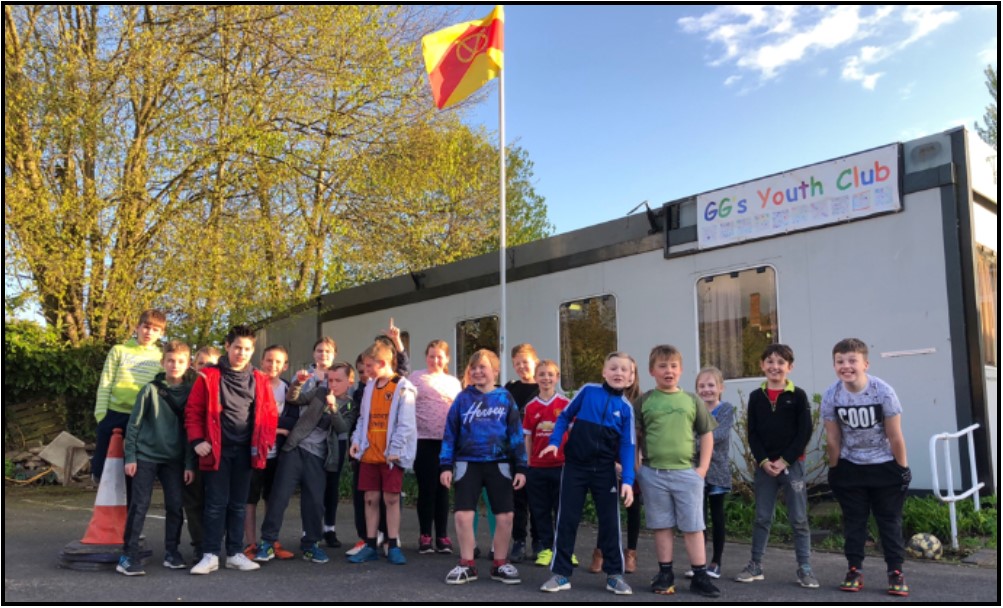 We celebrated Staffordshire Day on Wednesday 2nd May 2018, by serving Staffordshire Oatcakes and Pancake’s all provided for by Co-op. We also took a picture of all the members who attended that evening with the Staffordshire Flag in the background.